It’s not every day that you hear of a legal dispute about whether a certain divinity is or isn’t a god. This may be because our states – at least, Australia, the UK and the US – have no formal obligations towards gods, and will generally refuse to comment on the true divinity of a god in the interests of protecting religious freedom. 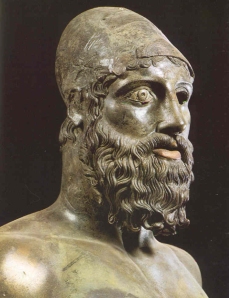 Riace Bronze B, speculatively suggested to be a depiction of Amphiaraus (source)

The Roman republic had it the other way around. There was no official obligation for the state to tolerate religions, but the state was formally obliged to serve gods. John North, in his article, “Religious Toleration in Republican Rome,” has argued that while the Romans were generally tolerant in practice, the concept of “religious toleration” as a moral obligation was absent from Roman thought:

We certainly do not know at any period of any theoretical principle of allowing plurality of worship or belief. The toleration, if that is what it was, was a function of situation not theory.[1]

Roman texts about religion do not contain any real discussion of “religious tolerance.” When the state occasionally repressed cults, such as during the Bacchanalia Scandal of 186 BCE, and when Cicero mentioned that women were banned from participating in unsanctioned mystery cults,[2] none of the sources accused the state of having violated any civil rights of freedom of religion, nor did any source make any reference to the idea of freedom of religion. It seems that the Romans did not tolerate religions out of principle.

Instead, the Roman State was formally obliged to serve the gods. Where a modern secular state would refuse to identify gods, the Roman state devoted a significant portion of its resources to public sacrifices, the maintenance of temples, the observance of religious festivities (or Fasti), and so on. The state was essentially a religious participant, albeit one with special duties and with grander obligations than the average participant.

So that brings us to the problem of defining a god. If the state was obliged to serve the gods, and if the worship of the gods involved a non-zero sum of money, the state needed to decide seriously about what qualified as a god or divinity, in order to distribute its resources appropriately. Is Amphiaraus a god for the purposes of the law?

No! Said the tax collectors. Yes! Said the citizens of Oropus, a town in Boetia, Central Greece.

Amphiaraus was an important legendary prophet. In lists of prophetic individuals, he is often compared to Teiresias, the blind seer in Homer’s Odyssey.[3] The citizens of Oropus, Boetia, honored him with a hero-cult at the Amphiareion or Temple to Amphiaraus, which no doubt attracted a lot of visitors to the town who came to receive prophetic answers. 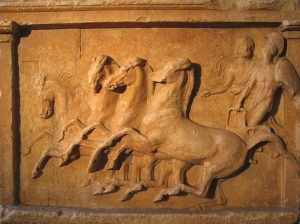 The Roman general Sulla passed through that region during his wars against Asia in the 80s BCE.[4] It is possible that a representative the Temple of Amphiaraus prophesied that the Roman general would win his wars, but we do not know the details of why Sulla favoured Amphiaraus. In any case, Sulla was so pleased with Amphiaraus that he pledged a large plot of land to the god as well as all of the revenues of the city of Oropus and surrounding area.

Sulla… declared as follows: “For the purpose of fulfilling a vow I grant to the Temple of Amphiaraus a tract of land 1,000 feet in length and width, that this land may also be inviolate.”
Likewise he consecrated to the god Amphiaraus all the revenues of the city, the territory, and the harbors of the Oropus for the games and sacrifices which the people of Oropus celebrate for the god Amphiaraus, as well as for those which hereafter they will celebrate for the victory and supremacy of the Roman people.[5]

According to Sulla’s decree, this land and those revenues were meant to be tax-exempt. But after Sulla died in 79 BCE many of his legal reforms were quickly repealed, and some of his tax exemptions in the East were revised.[6] Tax collectors swooped down on Oropus and exacted money from the city and the Temple’s land, no doubt hoping that this place would be summarily brought under Roman taxation, too. The confusion must have been quite serious as it wasn’t until a full five years after Sulla’s death that the Oropians sent a delegation to Rome to dispute their taxes.

The tax-collectors, perhaps straining to find a legal loophole, claimed that Amphiaraus was not a god for the purposes of the law. Cicero, who was present at the hearing as a young senator,[7] provides the only clue to how they argued this. The legal formulae for exempting Temples from taxes said that it would be done “for the honour of the immortal gods” and that the lands would be enjoyed “for the security of the immortal gods.” According to Cicero, the tax collectors said that Amphiaraus was not an “immortal” god since in the legends he was once a human being.

Then will Amphiaraus and Trophonius count as gods? Tax-collectors in Boetia, when confronted with lands belonging to the immortal gods which were exempted from tax by regulation of the censors, used to rule that those who at one time had been human beings did not qualify as immortals.
– Cicero, De Natura Deorum, 3.49

The Latin and Greek words for “immortal”, immortalis and ἀθάνατος respectively, both contain a word for “death” and a negating or privative prefix. Literally, as they are spelled out, immortalis and ἀθάνατος would mean “deathless” or “undying.” These words were also used in prayers and invocations to the gods, and students of the Cambridge Latin Course will recall the expression, di immortales! or “the immortal gods!” as a type of swear said when the person is shocked or surprised at something. In legal documents, the gods were often called “the immortal gods” as well, and the record of Sulla’s decree about the exemption of temple lands, as referenced in the Greek inscription at Oropus, used the phrase οἱ ἀθάνατοι θέοι to denote the immortal gods, while just the plain word οἱ θέοι (“the gods”) is also frequently used in the greater inscription. 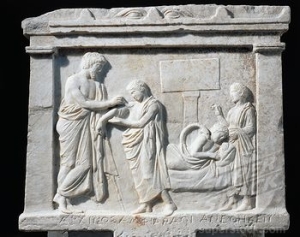 The stage of the dispute was set. The tax-collectors claimed that since Amphiaraus was once a human and had died at the end of his human life, he was not an “immortal” or “deathless” god for the purposes of the law, and that as a result his lands and the town of Oropus would be subject to Roman taxation. One could note that the Senate was not forced to accept all of the dead Sulla’s tax boundaries and tax exemptions, as many of those were repealed within ten years of his death. Moreover, there would be an economic incentive for the Senate to disregard the petition of Oropians. Rome would be able to pocket more taxes from Boetia. The Oropians were far away from Rome and were not in a position to retaliate, and had probably been unjustly taxed this way for some years already.

It is a sign of how important vows to the gods were, that the Roman Senate ruled firmly in support of Oropians.

In this particular case, the Senate had at least already ratified Sulla’s vow a year before his death. The Greek inscription on a marble tablet at Oropus records the Senate’s unanimous verdict in favour of Sulla’s tax exemptions of the entire city:

In regard to the said matters a confirmatory decree of the Senate appears to have been passed in the consulship of Lucius Sulla Epaphroditus and Quintus Metellus Pius [=80 BCE]. This decree was formulated as follows: All that Lucius Cornelius Sulla, in accordance with the advice of his advisory council, assigned and granted to the god Amphiaraus and to his temple, the Senate deems that these same properties have been given and conceded to this god.

In reply to the Oropian appeal, the Senate of 73 BCE ruled once again that the city of Oropus and its surrounding territories was tax exempt because of Sulla’s vow to Amphiaraus:

The marble inscription does not provide details about the discussion that took place in the advisory council. It seems likely that the tax-collectors’ claim that deified humans could not count as “immortal gods” was rejected because it rested on an over-literal understanding of the respectful title “the immortal gods.” One of the foundational principles of Roman law was to uphold the spirit or the intent of the law rather than just the letter of the law:

In the advisory council’s opinion, the tax-collectors could not legitimately claim that Amphiaraus, the legendary prophet, was not a god simply because he might have technically died at some point. Moreover the law did not intend to create a category of “immortal gods” as distinct from other gods in general. The Senate ruled in favour of upholding the dead Sulla’s vow to the god Amphiaraus.

This case study shows some of the important differences between the Roman Republic and our modern secular states. The Roman state actively participated in the cult of the gods and took its vows very seriously. Although some of Sulla’s tax reforms were repealed in the years after his death, the Senate continued to honour his generous vow to Amphiaraus in spite of the tax-collectors’ attempts to get around the law. Because the state was obligated to perform duties for the gods, it was sometimes necessary for the Senate to do something which would be unthinkable for our modern secular governments – it made a ruling on whether or not a deity was legitimate. In modern terms, this violates the principle of the separation of religion and state. To the Romans, it was simply the way things worked. The gods were relevant to the state, and the state could give its verdict on theological questions.

“They were no lowly and unknown men, nor were they like the person described by Ennius, who, for their own gain, uphold opinions that are false, but they were eminent men of the noblest type and foretold the future by means of augural signs. In speaking of Tiresias, even when in the infernal regions, Homer says that he alone was wise, that the rest were mere wandering shadows. As for Amphiaraus, his reputation in Greece was such that he was honoured as a god, and oracular responses were sought in the place where he was buried.”

"To be ignorant of what occurred before you were born is to remain always a child." - Cicero, Ad Brutum. Carla is a secondary school Latin teacher. In 2013, she finished first-class Honours in Classics, writing a thesis on accusations of impiety among philosophers in Greece and Republican Rome. She loves ancient art, ancient history, theology and pretty much anything to do with the Romans.
View all posts by Carla Hurt »
← On the merits of learning German
List of Epigraphical Resource Abbreviations →