RSS Feed
← ‘Palatina Medea’ or ‘Medea Palatina’? A preference for adjective-noun word order in Latin
When ‘comprehensible input’ is not enough →

Getting better at teaching scansion

Previously, I had taught the scansion of dactylic hexameter by giving a lecture of the whole system then getting students to have a crack at it with a copy of Latin text – and with no macrons printed either.

(I quickly learned not to use the opening of Aeneid 1 as the starter material, because line 2 is so aberrant – you could go hundreds of lines without seeing an –ia ending turn into a –ja like that! It’s awful! If I do use the opening of the Aeneid for learning scansion, I tell students to skip line 2, and all the while it stares at us awkwardly on the board.)

Now I’ve just introduced scansion with my year 11s, who are translating a section of Ovid’s Metamorphoses, and I’ve worked out a way to make the first introduction to scansion less of a lecture, and more of an intuitive workshop. 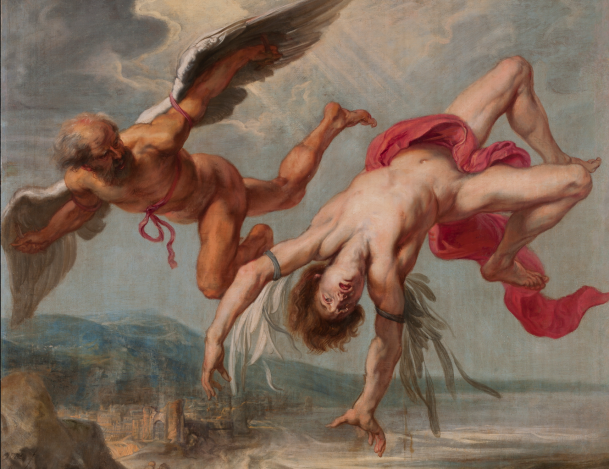 Icarus and Daedalus – our set passage from Ovid, and perhaps a metaphor for how students feel when they first see hexameter scansion. [source]

My goal in this session is not to give students a step-by-step formula for answering exam questions – not yet. My goal is to bring them to understand scansion from first principles.

I start with a text that has the macrons printed in it (and I pre-mark out the elisions, if I haven’t already taught elision). By printing macrons, we show them that Latin vowels are innately long or short – not just whether they ‘need to be for the meter’. When you learn to scan on blank letters, you end up thinking backwards about vowel length – ‘it can be worked out when you know the rules’. But the poet worked the other way, carefully choosing words according their innate sounds so that they would produce the desired rhythms. In other words, it is not the meter which determines the vowel length, but the vowel length which produces the meter. By starting with a text of printed macrons, it is easier for students to see (without the teacher explaining it) that the rhythm emerges from the word choice, and macrons are not just invisibly appearing whenever the puzzle demands it.

In my own experience, I have found that scansion is far easier to pick up in Ancient Greek than in Latin, because even if not all long vowels are given macrons, at least the eta and omega characters mark the long ē and ō, and all elisions are printed for you. It is far more intuitive to get the feel for scansion in a Greek environment, so why not set up a similar type of situation initially for our Latinists?

Firstly, I explain that Latin syllables can be long or short. I use the words ‘long’ and ‘short’ rather than ‘heavy’ and ‘light’ because ‘heavy’ sounds like a stressed syllable and ‘light’ sounds like an unstressed syllable, and I don’t want them to think that way. The words ‘long’ and ‘short’ are more clearly about the quantity of time. (I also avoid using the term ‘a vowel long by position’, as that implies that somehow the short vowel sound is lengthened if a cluster of consonants follows it – I would simply call that a ‘long syllable’ which may contain a short vowel.) I explain that long syllables take twice as much time to say as short syllables, and I draw some musical notation (a crochet and a quaver) to reinforce that this is a timed rhythm. 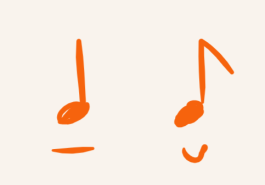 Then I write out the three reasons a syllable can be long, with examples:

A syllable is LONG if any of these are true…

*Maybe in the future I’ll try explaining the last thing using the terminology of closed versus open syllables, but I tend to skip the step of dividing syllables with the students, because I don’t want to overcomplicate something that is already quite complicated. I can see the merits of starting with just practicing syllable division, I just haven’t done it that way myself.

I then get students to write long and short marks on all the syllables on lines of poetry, paying close attention to macrons, consonants in the following word, and whether something counts as a diphthong. They’ll make lots of mistakes here but you can go around to each of them and coach them through each mistake, until they get more accurate at marking long and short syllables.

The student thus ends up with “fully scanned” lines that just don’t have any foot divisions yet. This is perfect for setting up the next principle.

This next principle is the division into feet. I explain that this type of poetry is called ‘dactylic hexameter’. Each line is divided into six musical bars (hence the hex- in hexameter) which are called feet. Each foot contains a pattern of longs and shorts: in dactylic hexameter, this must either be a long-short-short (dactyl) or a long-long (spondee). For the benefit of the musical students, I say it’s like a piece of music in 2/4 time, and I draw the musical notation for the dactyl and spondee bars with crochets and quavers. I don’t explain the trochee yet.

The students now add the foot-divisions into their lines. At this point any mistakes the teacher hasn’t caught will become very obvious to the student. They learn from this experience, without me needing to tell them, that there are some impossible rhythms – three shorts in row, or a short between two longs, for instance. If they see those groupings, they know they must have done something wrong. This is valuable experience for later using the meter to work out quantities.

If you have assigned different lines to different students or groups of students, you can then put everyone’s answers together on the whiteboard or on your projector and end up with about 10-20 lines of scanned poetry, with foot-divisions.

This is the point where I read out a couple lines for the sound, and then sound out the last two feet of several lines and ask students to notice the rhythm. They can see it, it is obvious now – the final two feet are always: *CLAP clap-clap CLAP CLAP*

This is also the point where I introduce the trochee, simply by saying that the last syllable is allowed to be a short without ruining the rhythm of the line.

At this point in the lesson, one of my students took it on themselves to write out the end rhythm in musical notation: 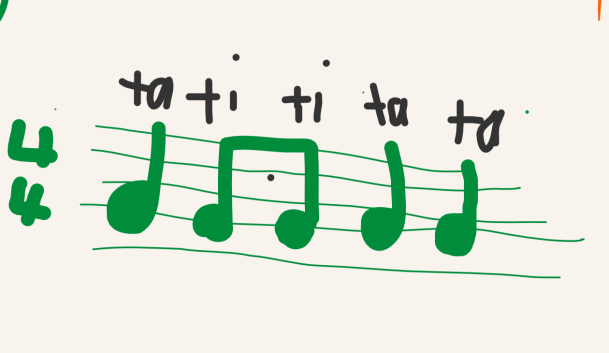 In later sessions I can talk about the mid-line caesura, the clash of accent and ictus, and other details, and about strategies for working out scansion when macrons are not printed. Not everything needs to be crammed into the first encounter.

Introducing the idea of scansion this way has been quite advantageous. When rhythm rules (like the 5th-6th foot pattern) are discovered by the students through their own work and observation, they take more ownership of their learning – as we saw with the musical sketch!

Students also get a ‘big picture’ view of what the scansion should end up sounding like, before being herded into a set of steps of how to work it out efficiently in exam conditions.

Posted in Uncategorized. Bookmark the permalink.

"To be ignorant of what occurred before you were born is to remain always a child." - Cicero, Ad Brutum. Carla is a secondary school Latin teacher. In 2013, she finished first-class Honours in Classics, writing a thesis on accusations of impiety among philosophers in Greece and Republican Rome. She loves ancient art, ancient history, theology and pretty much anything to do with the Romans.
View all posts by Carla Hurt »
← ‘Palatina Medea’ or ‘Medea Palatina’? A preference for adjective-noun word order in Latin
When ‘comprehensible input’ is not enough →