When Classics and Theology were the same subject

Classicists are usually vaguely aware that the study of ancient literature is a very, very old field of research, and that it used to be merged with the study and exposition of Christian theology. It is rare, however, for a Classicist to actually come up against past scholarship and see firsthand what kind of work that that unholy (or holy?) union had once produced. More often, modern Classicists are looking uncomfortably at each other, trying to spy latent “Christianizing” approaches in their own work, without actually having a clear definition of what could constitute a “Christianizing” approach in the first place. 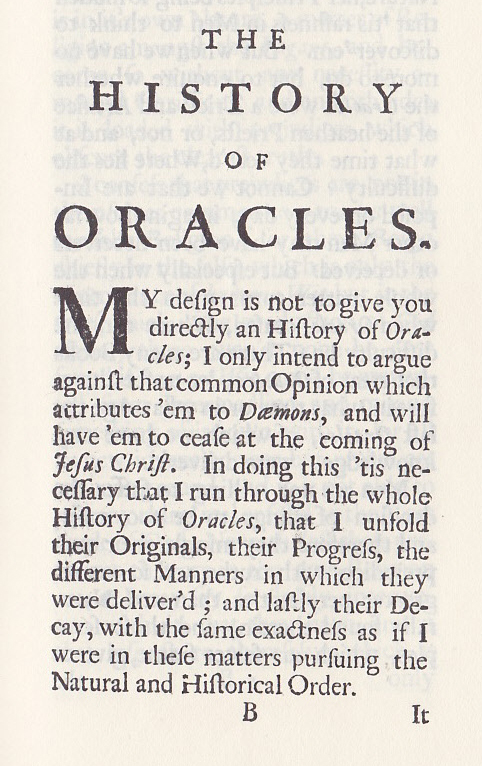 In this article, I’ll look at “The History of Oracles and the Cheats of the Pagan Priests,” the work of a brilliant seventeenth century French scholar and theologian, Bernard de Bovier de Fontenelle, translated (or “made English”) by an anonymous English translator in 1688. It was surprisingly easy to get a hold of a copy of this work, since it was reprinted in 1970.[1] Even more astonishing is that the reprint preserves all the mad quirks of the seventeenth century English edition – the s’s look like f’s, many more words are contracted than normal (them becoming ‘em, for instance), “biased” is spelled “byassed”, and I haven’t yet worked out the rules thumb governing its frequent Capitalisation and Italics.

It’s… infuriating, almost, reading that old orthography, which makes the fentences found like this when I read them in my head. But I like these quirks. It’s the text warning you that you’re not in modern scholarship any more. Out here be monsters.

I will make one obvious point before I start picking it apart, though. A certain idea may have been convenient to a particular ideology, but that fact alone would not make it false. I could say the same thing about Christians and Marxists. What really makes or breaks a theory is not who said it, or what purposes they put it to, but how well it is supported by evidence from ancient texts.

Why then should we talk about “Christianizing” errors? All false claims are false because of textual support, not because they fit or break away from an ideology. But whatever your ideology is, it will influence the kinds of mistakes you are likely to make. It doesn’t cause the mistake in itself, but you are more likely to err in favour of your ideology than against it. Therefore, when scholars read other works, they should most carefully examine the historical basis of claims which are favourable to the author’s ideology.

So let’s get to work. I chose to study Fontenelle’s “The History of Oracles and the Cheats of the Pagan Priests” because it deals with pagan religion, the area of Classics which is perhaps the most wary of Christian bias. Currently I’m writing my thesis about Greek and Roman religion, and without a doubt, the often repeated claim about pagan religion is that it is all about ritual, not belief. Thus, the first bullet point in John Scheid’s list of guiding principles at the start of his Introduction to Roman Religion reads:

This was a religion without revelation, without revealed books, without dogma and without orthodoxy. The central requirement was, instead, what has been called ‘orthopraxis’, the correct performance of prescribed rituals.[2]

That impression would not be entirely correct. The real difference between our current model and the earlier one is that back in the seventeenth century, the Romans were ridiculed for having a “dry, decadent” religion which was based on rituals without any beliefs. Today, just like our predecessors of 300+ years ago, we keep emphasising as much as possible that Roman religion was a religion of ritual, but unlike them we say that it would be wrong to condemn the religion for being “dry” or “decadent” on that basis. That is considered an improvement.

Let’s try to understand the ideology of earlier scholarship. If you ask modern scholars, they will say that Christian scholars used to treat Roman religion as if it were Christianity, and when they couldn’t find Christian belief in Roman religion they condemned the religion for being dry and decadent. In this understanding of the scholarship, apparently the Christians were really trying, genuinely trying, to see their own religion in paganism, but this led inevitably to the scholars’ disappointment. Frustrated, they then denounced paganism as depraved and degenerate. Clifford Ando summarises this modern view of older scholarship:

For their part, those [modern scholars] writing on Rome came to articulate their alternative in the first instance as a rejection of what they called the “Christianizing assumptions” of earlier scholarship. No target received more withering criticism than the twin pillars of Protestant historiography, namely the search for some Roman equivalent to Christian “faith” and the denigration of ritualism and its priestly devotees.[3]

That brings us back to Fontenelle, and his “History of Oracles and the Cheats of the Pagan Priests.” His work was popular and influential, and it exemplifies the ways in which Classics and Theology used to flow seamlessly into each other.  In order to see his biases and know where we ought to be most critical, we need to understand his prime motives.

The original task of Fontenelle’s essay was to demonstrate the uniqueness and singular truth of Christianity. At the time Fontenelle was writing, and indeed for centuries earlier, there was a popular line of belief among Christians that spiritual forces, i.e. demons, had spoken accurate prophecies about Christ through the mouths of pagan oracles, and that after the birth of Christ these oracles had miraculously gone silent. Fontenelle couldn’t accept this theology, because he didn’t think that God would deliberately allow demons to inspire accurate prophecies and thus give credibility to paganism. He wanted to show that the pagan priests and prophets had never been anything other than charlatans and that even the pagans themselves did not believe them. For these reasons, Fontenelle wished to alienate belief from pagan religion and show that it was sustained only by deceitful pretence.

Fontenelle says at the start, “I don’t just want to give you a history of pagan oracles; I want to argue against the common opinion that gives them credence by attributing them to demons and says that they ceased at the birth of Christ.” (I paraphrased it, but you can read his wording in the image below.) 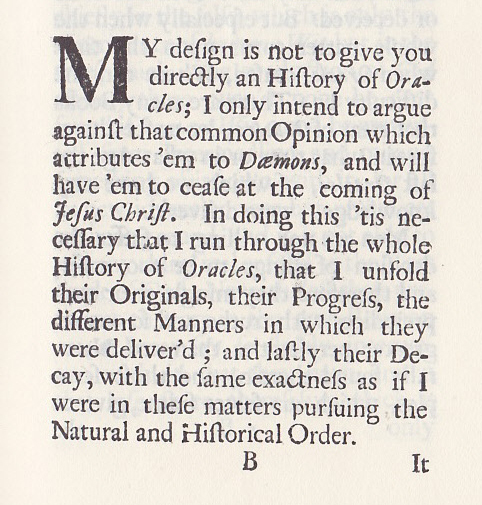 As part of his project to discredit pagan prophecies and show that they were all mere human inventions, Fontenelle wanted to show that the pagans themselves did not believe in their own religion. Or, at least, the most enlightened ones didn’t. His main source for this claim was Cicero’s On Divination, a dialogue in two books, where the first one raises arguments in favour of divination and the second one raises arguments against. Fontenelle took Cicero’s book for granted as a sceptical attack on augury and divination.[4] He then generalised from there, stating that since Cicero could get away with saying sceptical remarks, pagan religion must not have cared at all about beliefs, even beliefs in the efficacy of cult. 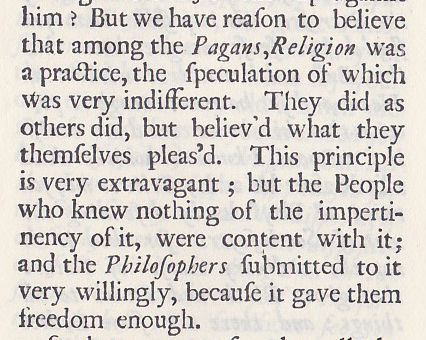 Clearly, then, Fontenelle was not actually trying to see Christianity in paganism. He didn’t approach the Roman religion with naive hopes of finding signs of his own faith in it. His agenda was very much to do the opposite. He wanted to emphasise, as much as he could, the difference between mindless pagan ritualism and Christian orthodoxy. That is because he wanted to convince his audience that the pagan oracles were not divinely or demonically inspired to give accurate prophecies about Christ. He wanted to show that pagan prophecies were never trustworthy. To Fontenelle, all of pagan religion was sustained by the cheats of deceitful priests.

Such were his motivations. But how well does his evidence hold today?

Fontenelle’s main source, Cicero’s On Divination, is no longer taken for granted as evidence of rampant scepticism. In 1986, Mary Beard and Malcolm Schofield published twin papers which criticised the notion that Cicero’s On the Nature of the Gods and On Divination led inevitably to sceptical conclusions.[5] Beard argued for a more complex and cautious reading, noting that Cicero’s theological works were concerned with how Greek philosophy could harmonise or clash with traditional Roman religious concepts.[6] For these reasons, most of Fontenelle’s evidence no longer lends much support to his claims that the Greek and Roman religions were completely devoid of belief.

And yet, modern scholarship hasn’t quite shaken off that habit of always trying to emphasise the distance between pagan and Christian religion. In complaining about this, I don’t mean to claim that Roman and Christian religion necessarily were very similar. In Roman paganism, an immense variety of apparently contradictory myths and ritual interpretations existed together without this being much of a cause for concern. The Romans were clearly not worried about pinning down one orthodox story about the gods, which is quite different to Judaism, Christianity and Islam. But the stance that the pagan attitude to beliefs was always completely and utterly different from Christianity “just because”, since it was paganism, is very much a Christian-biased position which hasn’t really budged from Classical scholarship in over three hundred years. But then to oppose that view, and to even think about talking of beliefs in pagan religion, is seen as “Christianizing”.

The moral of the story for Classical scholarship is that we should not assume that we already understand the complex ideological biases of another era of scholarship. The only way to get to grips with our own past is to at least get our hands on a work which was written in that era, and read its claims in the context of its overarching arguments. Only then will we be truly prepared to face up against our own discipline’s ingrown prejudices.

[3] Clifford Ando, The matter of the gods: Religion and the Roman Empire, (Berkeley: University of California Press, 2008), preface, x.

"To be ignorant of what occurred before you were born is to remain always a child." - Cicero, Ad Brutum. Carla is a secondary school Latin teacher. In 2013, she finished first-class Honours in Classics, writing a thesis on accusations of impiety among philosophers in Greece and Republican Rome. She loves ancient art, ancient history, theology and pretty much anything to do with the Romans.
View all posts by Carla Hurt »
← The five strangest deaths of the philosophers
Rape Culture in Classical Mythology →