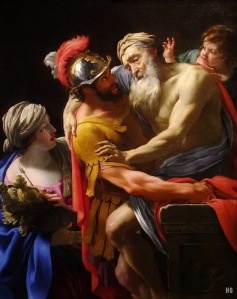 A man great in war, second to none in piety,
Aeneas, oppressed by the hatred of hostile Juno,
Seeking Italy, went astray on Sicilian waves…
– Ovid, Decastich arguments of the Aeneid, I.1-3

It’s not every day that we stumble across a beautiful, hidden gem like this work. In my head I call it the mini-Aeneid, because it is the only surviving poetic summary of the Aeneid which truly captures the epic proportions of the work in miniature. Ten lines of epic verse (dactylic hexameter) are dedicated to each of the twelve books of Vergil’s Aeneid – no more, no less. The work hits the highlights of action in each book, but sensitively, without being carelessly brief.

In honour of the work and the huge amount of creative energy that went into it, I’ve written the first publicly accessible English translation of this work (as far as I can tell, it doesn’t have any published English translations). Click here to read the Latin text alongside my English translation (link opens a small pdf document), which comes with its original preface – and as extra goodies, a set of monostich or single-line summaries of the books of the Aeneid from a separate author.

This work should properly be called Ovid’s Decastich arguments of the Aeneid, or in ordinary words, his ten-line poetic summary of the Aeneid. Tune in below for a quick summary of what we mean by ‘arguments’, the history of the work, and a discussion of why I am persuaded that the ten-line summary is a genuine work of Ovid and not a spurious attribution.

Since ancient times, the term argumenta or ‘arguments’ has referred to a summary of the main points of a work. These ‘arguments’ were added at the start of a long work or major section within the work, so that someone who was literally scrolling through a text, or else leafing through the pages of a codex, would be able to read a quick summary and tell what was in the main work. It was a practical reading help, like a heading, except that it might go for several sentences.

Sometimes argumenta can be found by themselves in collections separate from the actual body text they refer to, and sometimes these summaries have survived where the original text has been lost. So some arguments can be very interesting to textual scholars, since they provide summaries of texts which we would otherwise know nothing about.

Argumenta can be written in ordinary prose, like the important Arguments of Ovid’s Metamorphoses, attributed to Lactantius Placidus. But as humans and lovers of art, we sometimes transform the things which were meant to be simply utilitarian into objects of beauty. And as a result, there do exist many argumenta which are written in verse, including ten-line (decastich), six-line (hexastich), four-line (tetrastich), one-line (monostich), and even half-line (hemistich) arguments of the Aeneid.

The decastich argumenta of the Aeneid appear to have been the most popular and best preserved. The work is substantially present in at least seven manuscripts, far more than any other set of Aeneid arguments. This work certainly had a very positive reception.

These decastich arguments are sometimes found with the monostich arguments placed in front of each miniature book. When that happens, it’s like seeing someone open a Russian doll, with a smaller version inside each layer. ‘I heard you like summaries, so I made summaries for your summary so you can browse while you browse.’

And, if that weren’t enough, there are discrepancies between the two – the monostich entry for book eleven is all about Camilla, while the decastich argumenta treat her almost as a footnote. Also, the preface specifically mentions that Ovid wrote a ten-line set of arguments, not an eleven-line collection. It seems fairly obvious, then, that the one-line argumenta were written by another author and were added on top of the longer summaries for easy reference.

But what of the authorship of this work? Should we seriously consider that the attribution of the decastich and its preface to Ovid is true?

belli causa fuit violatus vulnere cervus.
The cause of the war was a deer, violated with a wound…
– Ovid, Decastich arguments of the Aeneid, VII.9

The question of authorship is often a thorny point of contention in Classics. On the balance of evidence, however, I am persuaded that the preface and the decastich arguments are genuinely Ovid’s works, while I do not believe that the monostich arguments are from the same author.

The decastich argumenta have uniformly been attributed to Ovid in all the medieval manuscripts which name an author. However, since the sixteenth century, scholarship cast doubts on the authorship of the decastich arguments, thinking that the attribution must be spurious – I might add, without actually offering substantial reasons as to why.

The literary style of the decastich is certainly not lacking. Most commentators I’ve read, from centuries past and present, either kindly or grudgingly admit that these are the most beautifully and masterfully accomplished arguments of the Aeneid to have survived in the codices. It is the very first entry in the Teubner Latin Anthology, volume I part I entry 1, the jewel of its collection. In contrast, the six-line arguments attributed to Sulpicius Apollinaris are rather shabby; they seems to awkwardly lack verbs in places, and the rhythm does not flow as well. The four-line arguments are not much better. The monostich and the hemistich arguments are clever and sweet in their own right, but short nonetheless, and do not have to describe many details. The decastich therefore shines out among all the surviving examples as a great literary success, and a very accomplished work. If there was a passing hint that Ovid wrote a summary of the Aeneid – and there is, it’s in the attributions on the manuscripts – the decastich arguments would be the most likely candidate for Ovidian authorship.

The style of the decastich argumenta is consistent with Ovid – when I read this, it delivers the judicious clarity that I’ve come to appreciate in Ovid. In a more detailed study by Robert S. Radford in 1921 (the most recent scholarship I could find), the metrical patterns and phraseology of the decastich arguments were found to be not just suggestively but ‘conspiciously’ Ovidian:

I have therefore examined the prefaces (and metrical arguments) afresh with much care, and I find, for example, that they everywhere show – quite unlike the arguments of Sulpicius Apollinaris to the Aeneid – the masterly treatment of the penthemimeral caesura which appears in the Lygdamus, Catalepton, IX, Ciris, Priapea, etc., and which marks the consummate future artist. They have also most conspicuously the Ovidian phraseology, and the same is true of the arguments also, wherever the latter do not reproduce the original language of Vergil. Their genuineness is therefore fully attested by both external and internal evidence. [1]

I would make more points, and mention that the types of meter (elegy in the preface, epic in the arguments) also fit comfortably well with Ovid’s areas of expertise. However, I do not wish to labour this too much. On the reasonable balance of evidence, I am convinced that this summary was written by Ovid, and I do not see any substantial argument against Ovidian authorship other than a rigid adherence to scepticism by default.

Yet with all this said, I would gladly recommend this work as personal reading for enjoyment even if it were not written by the big name himself. The literary character of these argumenta holds true in either case. The decastich arguments fully deserved to be the most popular set of poetic summaries of the books of the Aeneid in the Middle Ages. Now that scholarship is showing signs of being less hostile to these minor works (and their attribution to Ovid), the beautiful argumenta don’t deserve to sit in obscurity and neglect any longer. May this miniature treatment of the greatest Latin epic continue to instruct and charm generations of Aeneid-lovers in perpetuum.

[1] Robert S. Radford, “The Priapea and the Vergilian Appendix,” Transactions and Proceedings of the American Philological Association 52 (1921): 155.

"To be ignorant of what occurred before you were born is to remain always a child." - Cicero, Ad Brutum. Carla is a secondary school Latin teacher. In 2013, she finished first-class Honours in Classics, writing a thesis on accusations of impiety among philosophers in Greece and Republican Rome. She loves ancient art, ancient history, theology and pretty much anything to do with the Romans.
View all posts by Carla Hurt »
← Keep calm, taxonomic Latin lives on
Five reasons why Latin should be taught in schools →